Flotsam & Jetsam reflects on the latest tour together with Sepultura as headliner. Furthermore the band expains the latest chnges in the line-up. Read here the statement from the band:

"We would like to send out a huge thank you to the many fans and press that came out to support us on our tour with Sepultura. This tour was the largest european tour to date for Flotsam and Jetsam. Our main goal is to get connected to all of you, shake your hands, look you in the eyes and let you know how much we appreciate you. You are the life blood of music.
As you know we released a complete reproduction of No Place for Disgrace this year. This was so we could present the album the way it was intended to heard. Many of you had great comments about this and that confirmed our decision to get this done."

"After completion of the 2013 tour with Testament in the US, Edward Carlson was no longer able to tour due to physical issues that would require back and neck surgery to possibly correct. We will miss our comerade and wish him well on his next adventure. Steve Conley has been officially recruited to fill the spot. Having played with David Ellifson(Megadeth) in F5 we are confident in his ability to hold the spot with integrity.
Jason Ward's departure happened after the tracking of Ugly Noise. Jason had spent nearly 16 years in Flotsam and decided to stay at home with his new family and career. He was and is one of the strongest personalities in the Flotsam catalog of players. We have all had a turn on the sidelines, we will miss his participation on the road and his whitty humor. Shorty after the Testament tour in 2013 Micheal Spencer took the helm ad bassist. He was the first bassist to replace Newsted in 1987 formerly of Sentinel Beast. He was a part of the writing of No Place for Disgrace in 1987 and was on our first tour with Megadeth in the US and Europe. With that history it made perfect sense that No Place should be redone. You can hear him on the reproduction of NPFD." 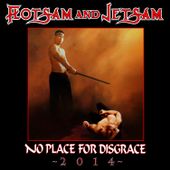 (*/10) The Swiss radio station DRS3 had in the 80's a two hour radio show about heavy metal. Every Wednesday night from 22.00-24.00 they played songs from new metal releases (does anyone know still