(8/10) Six years after the release of the controversial discussed "Nostradamus" British metal legend Judas Priest is back with a new studio album. "Reedemer of souls" is its name and it is packed with 13 metal tracks.

Actually I was doubting about the future of the band. After their really strong "Angel of retribution" album with Rob Halford being back the band decided to go for the concept story of "Nostradamus". Lost in details and the story concept the album was a step back. And last but not least K.K. Downing decided to leave the band and retire. All together not the best starting point for their way back to the metal we know and appreciate.

Things started to change after the band decided to continue and hired with Richie Faulkner a second six-stringer who filled the gap K.K. left. This was the intention and it worked out. Not only that Faulkner looks very similar to K.K. Downing, he also gave the entire band an extra energy push. At least this is how it feels seeing them live in the new line-up.

"Reedemer of souls" is the first studio record on which Faulkner contributed. Fortunatley things are going the right way. The album is closer to "Angel of retribution" than to "Nostradamus". Judas Priest finds slowly back to their old strength, which means playing powerful heavy metal with no frills. If the album is a redemption of your metal soul I don't know. It also doesn't reach the level of "Painkiller" and "Screaming for vengeance", but that wasn't also anything to expect. However, it's good metal stuff.

The opening package sets already the tone of voice. "Dragonaut" (more brutal) and the following title track (a bit more commercial) are dominated by heavy riffs and great hooklines. What becomes also obvious in the beginning the Halford is still a great singer, eventhough he doesn't get that high with his voice as he did e.g. in "Painkiller" times. But this isn't bothering me. "Halls of Valhalla" is a typical Priest track too with duelling guitars and a pounding drum line. It also reflects the more progressive side of the band from the UK. But it feels a bit strange hearing Priest singing about Odin and Valhalla. "Sword of Damocles" is one of the weaker songs on the album. It got a folk a kind of folk expression which doesn't really inflame the spark for me. Fortunately the mighty riff of "March of the damned" makes you froget the earlier tune immediately. The name of the track tells you already something about the music. It's a slow and mean with a pounding drum beat. A highlight on the record is "Hell and back". The song is another anthem with reduced speed. Starting almost as a balled the track build sup along the way and the hypnotic rhythm puts a spell on you. It's pure metal. But the best comes towards the end. "Metalizer" and "Battle cry" for sure belong to the top 5 songs on the album. Blazing fast guitars, a bassline which provides a unbreakable foundation for the songs and Rob Halford at his best. All trademarks of the band can be found back in those tracks. It was a wise decision of Judas Priest to put those anthems more towards the end. This keeps the tension in the album and makes it really entertaining till the end.

In one or another way it's with these kind of records like with the release of a new iPhone. Everybody expects a lot in front of the release and is disappointed if it's again just a smartphone - or in this case a good metal record. "Redeemer of souls" is a good, solid and well produced metal record. It shows that Judas Priest still knows how to rock. Good headbanging stuff. 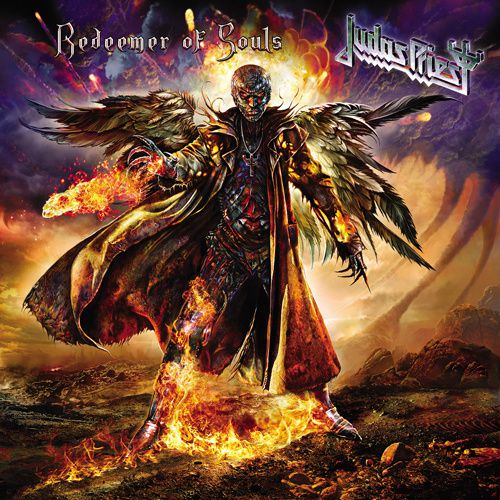