Breaking news: Pumpkin invasion in Zoetermeer, Netherlands. On Wednesday 03.06.15 pumpkins rolled over the smaller city in the Western parts of Holland. It was Helloween, the metal band from Hamburg, that started their European tour in Zuid-Holland and played a warm-up show in De Boerderij. Great decision.

The support slot for this evening went to Powerized. The five-piece is a Dutch band from Breda that plays power metal. You might came across this name already since their frontman Nick Holleman is also part of Vicious Rumors since 2013. The melodic power metal is mainly characterized by the vocal range of Holleman, which is quite impressive. Style wise the band is positioned somewhere between Helloween and Blind Guardian and from this perspective they fitted very well into this evening. That the band has already some reputation in the Netherlands became obvious. Sometimes you have the venues filled half when the support band performs. But this time De Boerderij was already packed when Powerized played their set and the audience enjoyed their set. 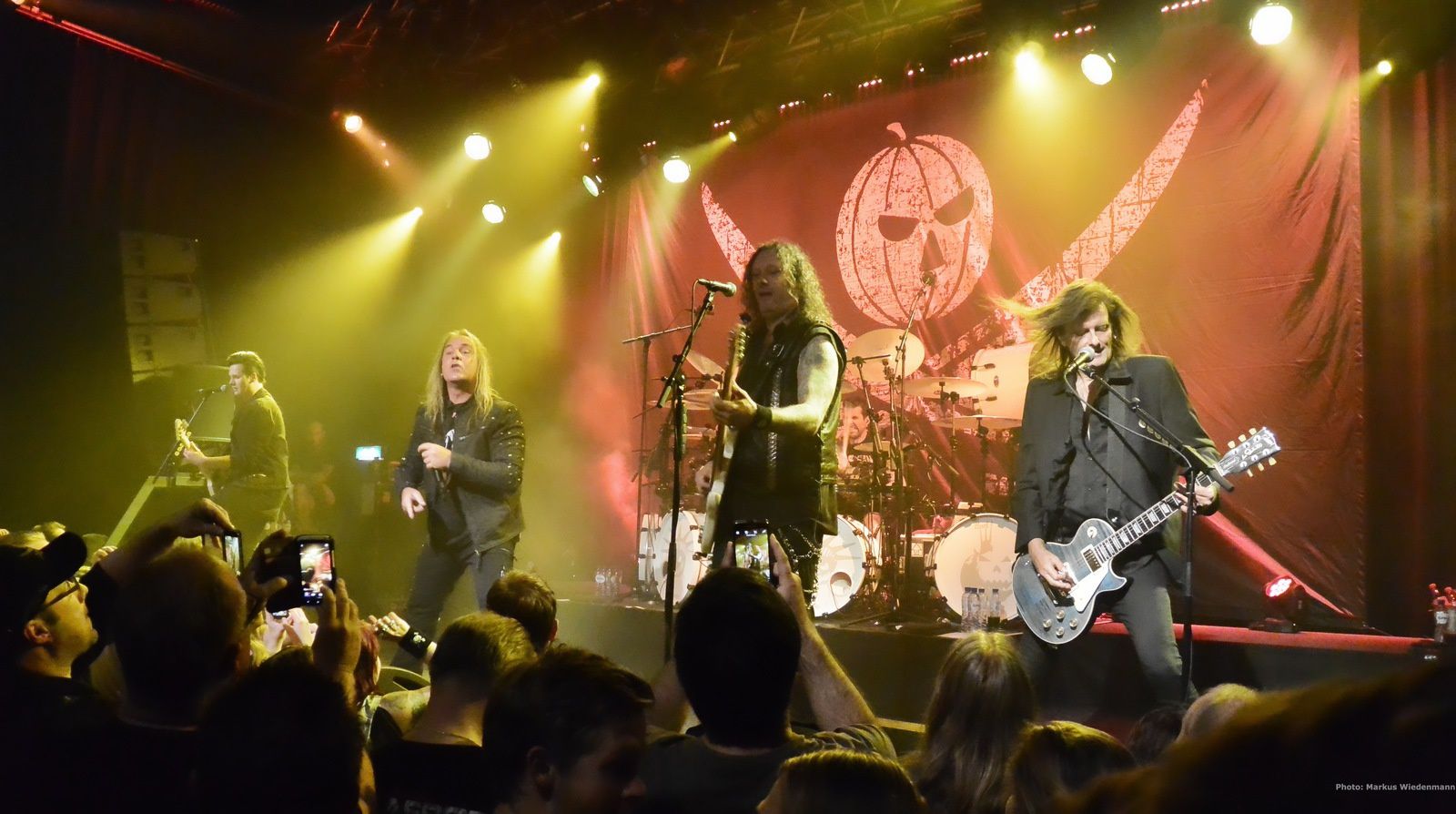 Than the pumpkins took over. After a not too long break the lights went down and the intro started. "Walls of Jericho" filled De Boerderij before Helloween had an excellent start with "Dr. Stein". A start with such a band classic must be a good one. And it was. The five guys had obviously a lot of fun. It felt very much like they have been very thankful to be back on stage after the months of being in the studio. As said earlier, it was a warm-up show - and it literally was. The temperature in the venue went up by quite some degrees when the Hamburg-based band played their show.
The setlist contained new songs like the outstanding "Lost in America", one of the best Hellowenn tracks since years, and the title track "My God-given right" that seemless worked together with classic from Helloween. "My God-given right" also included a sing-a-long part with the audience as well as "I want out". Deris asked, if it is too much cliche to do the floor/balcony competition. Maybe it was, but who cares. It was great fun and everybody enjoyed it. That's what counts.
Dani Loeble, who worked very hard behind his drum kit, also got his moment in spotlight when he performed a drum solo halfway the show. It was a good one, without any doubt, but since Helloween has so many great songs in their back pocket I would have preferred one more tune instead. However, an impressive thing was the white drum-kit that, I guess, was specially made for this tour, since it goes perfectly together with the cover of the new album.
After 90 minutes the band went off the stage and many 'Zugabe'-screams filled De Boerderij (yes, 'Zugabe' in Holland). And of course the five guys came back. Two classics turned the venue into a madhouse. Fans went crazy during "Future world" and "I want out". What a grande final.
After such an metal firework everybody had a happy smile on the face - including the band. I was very impressed by Helloween. An excellent new album and a awesome show. That's how we want to see and hear music from this metal dinosaur.
The tour just started and if you have the chance to see one of their shows - just do it. 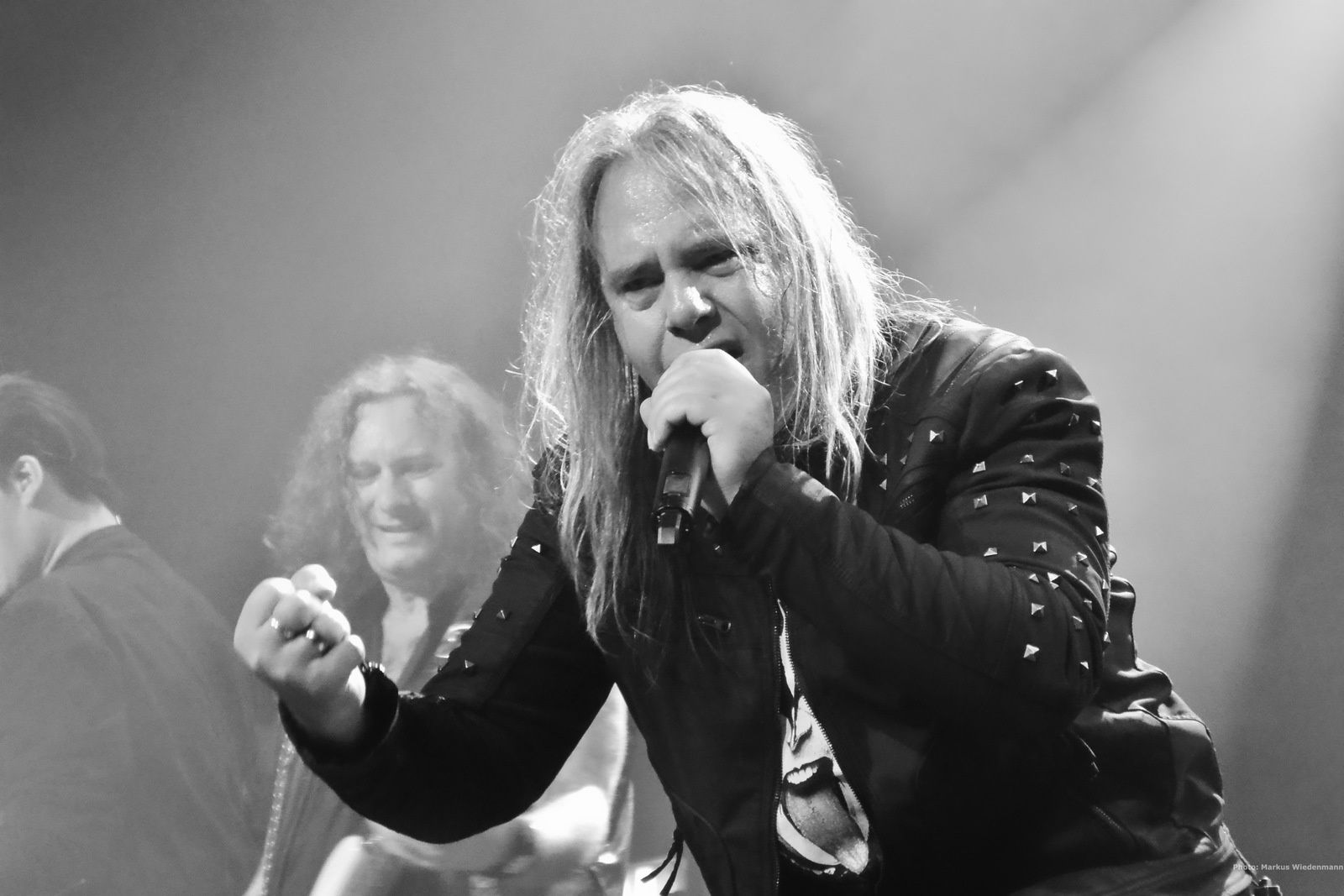