(8/10) It's almost a year ago when Spiders released their fantastic second album called "Shake Electric". This record brought the band quite some positive feedback and the guys from Gothenburg underlined it with shows played all over Europe.

This autumn Spider is back on the road again. They are embarking together with Uncle Acid and The Deadbeats (dates see at the end of the post). And right in time for this tour Spiders releases a new three-track EP that is produced by Niels Nielsen, who also worked with bands like Dead Soul and Ghost. The EP was mastered by Thomas Eberger and you can buy even a 10" version either on tour our via the link mentioned further down this post.

Two out of the three songs on the EP are new ones. The third one, "Watch Out", is a ABBA cover version.

The last mentioned one doesn't really sound like from the famous four from Sweden. Spiders version reminds more to 70's glam rock, something that proves the quality of ABBA songs and Spiders too.

The new tracks are emphasising the great impression the last album made. Spiders picks it up where they stopped with "Shake Electric". It's melodic, but also melacholic, classic rock which benfits a lot from Hoyles intesive voice.

The title track fits perfect into the current Swedish retro rock boom while "In a Room" is an easy going rocker that has with the harmonica a nice additional instrument embedded in Spiders sound.

"Why Don't You" is a nice extra for the tour and helps bridging the period till we can enjoy the next full-length album. 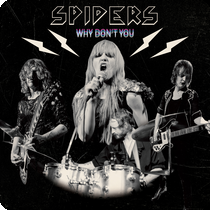