A 66% Scandinavian metal package brought a cold breeze and hot metal to Holland. Swedish metal Templars HammerFall embarked on a headliner tour through Europe, supported by their label companions Gloryhammer and Swedish comrades Lancer - three bands that guaranteed a glorious metal night in Utrecht, The Netherlands.

Lancer from Arvika had to enter the stage first. The guys have a new album out, entitled "Mastery”. Their powerful speed metal was well appreciated and songs like the title track from the latest release as well as "Iscariot" are good song tunes done for being performed on stage. But also some gimmicks have been part of Lancer's 30 minutes gig, peaking on singer Isak Stenvall swaying around the mask that decorated the album's artwork. All this was the right introduction for what came next. Scottish/Swiss space invaders Gloryhammer filled the middle slot and their show was remarkable. First of all it was great to see how solid Gloryhammer's fan base in Holland seems to be. The moment the band entered the stage the room, at least the first rows, turned into a madhouse. 'Hoot' shouts filled the entire room. One can think about the costumes and concept of Gloryhammer whatever you want, the music and energy just rocks. The entire scenery made me smile more than ones but the epical sing-a-long power metal just puts a spell on you. The funniest Moment though was when singer Thomas Winkler aka Angus McFive gave the task to a fan to arrange a beer for the Hootsman by crowd surfing to the bar and back. Good music and entertaining show, embedded in a weird scenery. After such a performance it was up to the headliner to push even harder. Now, HammerFall is in business since two decades, they have tons of good songs and they have been a revitalizer of heavy metal in the grunge/modern metal 90's.

Next to the quality of hits like the new “Bring It!”, the great “Renegade” and the grande finale “Hearts on Fire” fans got with 90 minutes a full quantity headliner package. HammerFall left no doubt that they are the main act that night. Supported by a great stage set the guys obviously enjoyed playing in Holland, which was by the way their first show in Utrecht ever. A surprising moment though was Joacim Cans' rhetorical question about how many people are part of a Hammerfall show for the first time. I guess it was half of the crowd, something that wasn't to expect and a clear sign that Hammerfall should come back more often to Holland. Anyhow, regardless if new or longtime fan, everybody obviously had fun that night. Actually the amount of energy in the room was outstanding, esp. thinking about a Monday night.

Like mentioned earlier, the quintet can look back on a rich back catalogue which makes it hard to choose. One milestone that is effected by that is the ground-breaking "Glory to the Brave", the bands fantastic debut. HammerFall didn't went on the same road as many other bands, playing an entire album – not even as a 20 years special anniversary special show. The five-piece decided to promote the new longplayer and celebrate their classic with a "Medley to the Brave" featuring various songs from the debut. A good decision.

For the rest it was an entertaining and professional show that included Oscar's 'hammer guitar', Joacim Cans and Pontus Norgren kicking of "Glory to the Brave" acoustically while sitting in front of the drum kit and last but not least 90 minutes of authentic heavy metal with a strong traditional touch.

Seeing HammerFall live on stage is definitely a great thing. It might be that the latest longplayer was 'just' a good one, but HammerFall live on stage still shows the impact and power of the guys and their music. All in all it was a great way to spend a crispy Monday night with three bands that have us much in common by still being quite different. Horns up. 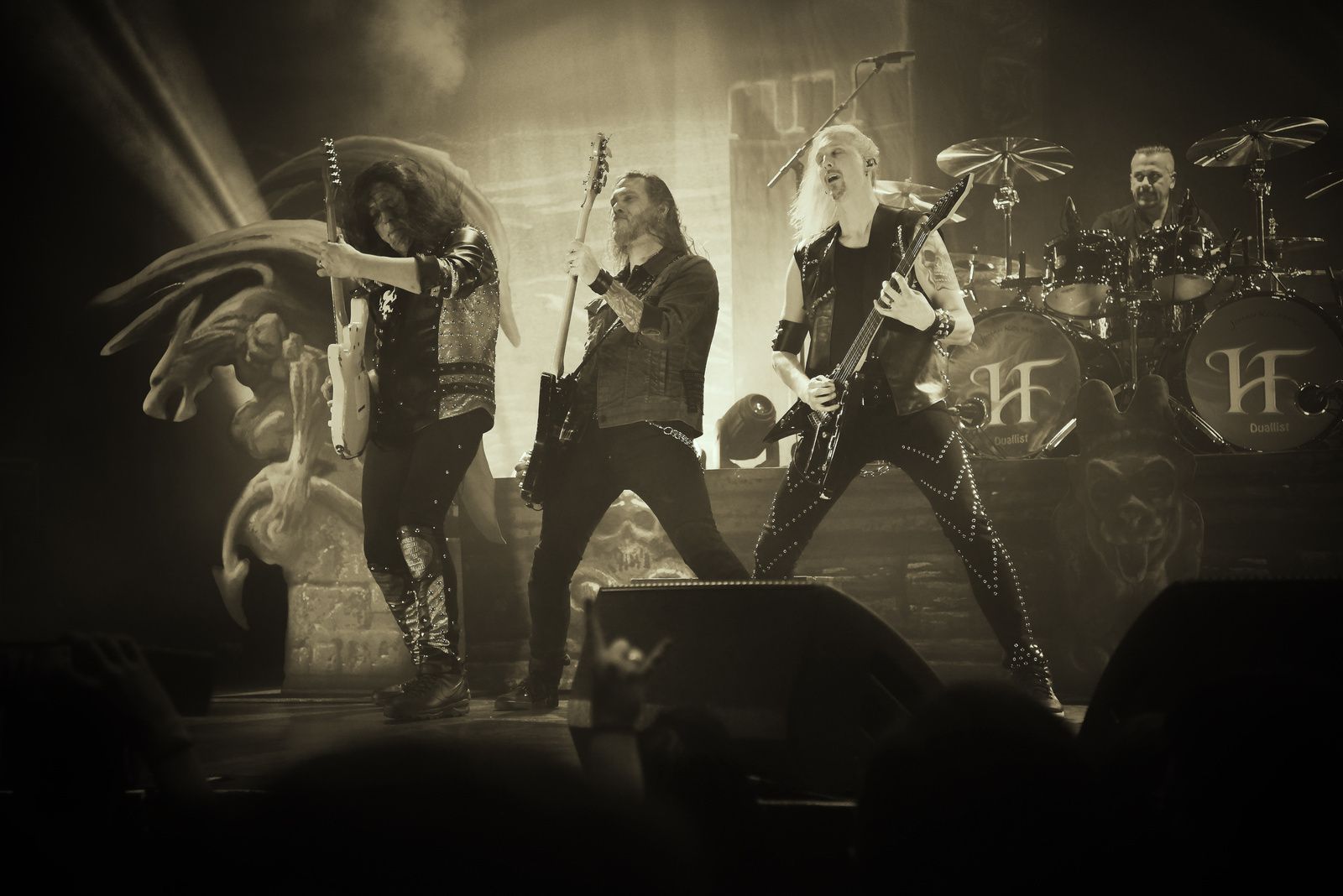