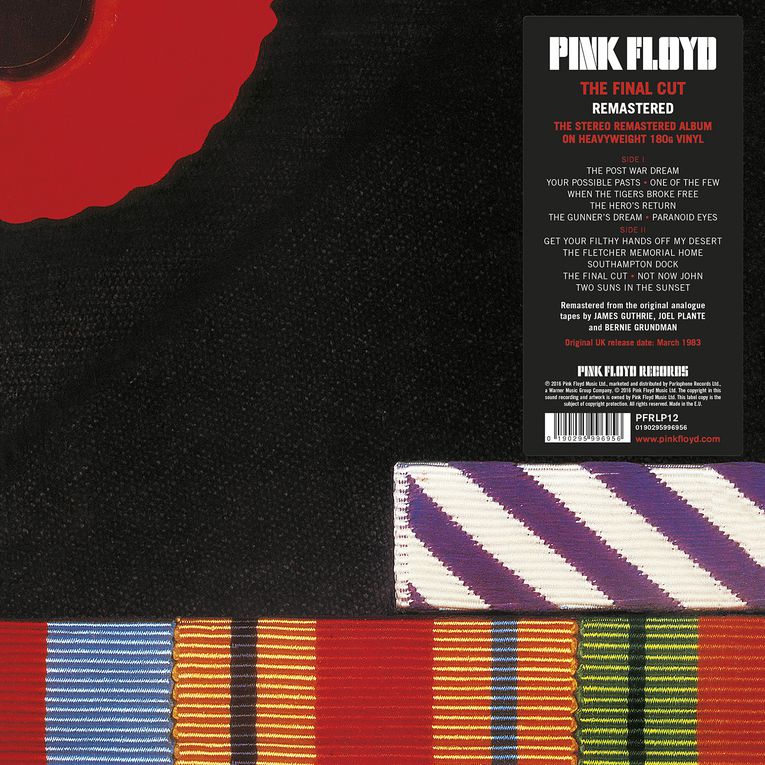 (*/10) As you know, it is Pink Floyd Records that re-issues milestone records of the iconic progressive rock band in vinyl. This cycle of re-releases comes now closer to an end. On January 20st the last two vinyl versions will hit the record shops and since the releases have been in chronological order, it’s this time “The Final Cut” and “A Momentary Lapse of Reasons”, closing this series of vinyl records.

Both records went through a remastering which was based on the initial analog master tapes and both discs come with the original artwork too. As with the previous releases also these two longplayer come in a 180 gr. vinyl version, nicely packaged in a gatefold cover.

“The Final Cut” goes back to 1983.The album is built on a conceptual storyline that was triggered by the Falkland War. This historic moment changed direction for the record, which was in the first thought meant to become a soundtrack and prolongation of the famous “The Wall” album from 1979. “The Final Cut” is kept in a dark and gloomy atmosphere that reflects the anti-war story very well. It’s like a grey haze that girdles each of the tracks. Also when it comes to the sound of the album and the tunes slightly changed compared to earlier days. Vocals got for more into the forefront on this record that comes with a narrative approach with music emphasizing the mood and emotional depth.

Four years later “A Momentary Lapse of Reasons” saw the light of day. The record came with another significant change of styles. Music and lyrics are more in balance again and the album sounds almost light-hearted compared to the oppressive “The Final Cut”. Probably it's these two longplayers that shows best what influence Waters and Gilmour had on Pink Floyd's unique music. No doubt, there are songs like the fabulous “The Dogs of War” which belongs to the heavier tunes on the album, including a grim sphere. But there are anthems like “Learning to Fly”, a real counterpart to the before mentioned with big soundscapes and a catchy chorus. Another highlight is the six minutes long instrumental “Terminal Frost” which shows David Gilmour at his best, a song framed into “A New Machine” part 1 & 2.  “A Momentary Lapse of Reasons” also includes the return of the legendary artist Storm Thorgerson, doing again the artwork for this release; like he did for so many earlier Pink Floyd records.

In the end this series was/is a well-done re-release of great albums done my one of the most influential bands in rock. Tracklist "A Momentary Lapse of Reasons":