Being on their way to Wacken Jim Mateos and band decided to add two shows in Holland to this short trip to Europe and if Fates Warning's in town you should grasp the opportunity.

One of the first questions this time was about the opening act. Sixth months ago the support bands were heavily discussed amongst Fates Warning fans. After Fallen Arise and Armored Dawn didn't do anything for the main act in Haarlem and it was this time an Austrian band that got the task to warm up the crowd. Honestly, I haven't heard of Psycho Village before and expectations were low. After having seen the guys I must say that the duo did a good job. Even though their modern metal / alternative rock didn't fit to Fates Warning at all the guys tried their very best to use the momentum. Especially singer/guitarist Daniel Kremsner constantly tried to animate fans in the sparsely filled room. In the end Psycho Village received a pretty good feedback from a crowd that actually came for prog metal with the duo scoring a decent result. However, knowing that Sanctuary played the same night a show in Arnhem raised the question of why both bands didn't perform a shared headliner show. It was really hard for fans to decide where to go to and such a package would have helped also to drive a few more metalheads to Leiden. After a rather quick scene-change prog metal dinosaurs Fates Warning started their show with "From the Rooftop" and gave fans what they were asking for - more than 90 minutes of finest progressive power metal with not that many changes compared to the January gig in Haarlem.

The setlist was almost similar, with one exception. "One Thousand Fires" was replaced by "SOS" from the band's latest longplayer "Theories of Flight" while the rest of the set stayed the same. Highlights from the earlier days have been played of which songs from "Pleasant Shades of Grey" got a bit more attention. Apart from that, songs like "Point of View" and "The Ivory Gate of Dreams: VII. Acquiescence" are great tunes from the eighties which go hand in hand with newer compositions such as "From the Rooftop". The only song I miss since a while is "Silent Cry".

Seeing and listening to Fates Warning live on stage is always a pleasure. These guys don't have any need to ballyhoo. Fates Warning has excellent songs in their musical repertoire, performed by musicians who share a common vision and passion for metal music. Jim Matheos and colleagues belong to the spearhead of progressive metal and the night in Leiden underlined again their importance and relevance. 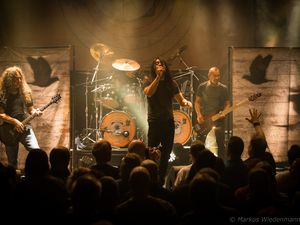